Strips is planning to launch in November with initial functionality that will enable interest rate swaps (IRSs) via automated market makers (AMMs), the decentralized exchanges over which much of DeFi is transacted.

In an interview with CoinDesk, Strips founder Ming Wu referred to IRSs as a “great instrument for both speculators and hedgers,” allowing users to switch between more volatile floating rates and safer, but lower-upside fixed rates on deposits on protocols such as Nerve.Finance.

“This is something we haven’t found available in DeFi so far, however, it is a huge market in traditional finance – we’re talking about over $6.5 trillion being traded in interest rate markets in a single day,” said Wu of IRSs.

The product will be launching natively on Arbitrum, per a press release provided to CoinDesk. Wu said that an Arbitrum-native release made more sense than the Ethereum base layer after the team studied various scaling solutions, coming to the conclusion that optimistic rollups would be the long-term solution to scalability.

The team is also planning a deployment to Binance Smart Chain, which is effectively serving as a “backup” in case Arbitrum runs into technical snags during their rollout.

Regardless of the platform, however, it’s unclear how much traffic Strips will attract.

One of the strangest puzzles in all of DeFi is why native traders – often referred to as “apes” and known for their love of volatility – have so far eschewed the dozens of decentralized derivatives platforms that are available.

Competing products to Strips already exist, such as BarnBridge and Pendle, but both float around 50th place in terms of total value locked (TVL) at roughly $31 million.

Wu said that the derivatives space still has promise, however.

“I would say the counterpoint is dYdX, that’s a decentralized derivatives exchange that has done tremendously well,” he said. “Perpetual Protocol and MCDex are also growing.”

Wu also hopes that Strips architecture, which uses an AMM model, will also help make the products easier to enter, exit and trade on secondary markets.

“There hasn’t been a good alternative or a good derivative instrument for users to trade interest rates as an asset class in and of itself,” he said.

The team is also planning a broader suite of products based on the initial interest rate swap exchange, including a fixed-income product called a perpetual bond – a fixed yield bond that will pay a set interest rate to the holder in perpetuity.

Other products in the works include one-week, one-month and one-year term bonds, as well as interest rate options and leveraged yield farming.

Strips Finance will be launching a public token sale on Oct. 13, per its website. 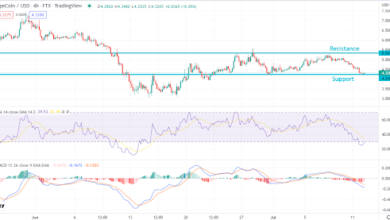 Is ApeCoin a buy after retesting $4.3 support? This is Where Bitcoin (BTC), Ethereum (ETH), and Dogecoin (DOGE) Prices Are Heading This Week Bitcoin Parabolic Rise On Cards! BTC Price Will Hit This Level By End Of 2022