BeIn Crypto takes a look at the seven altcoins that decreased the most over the past seven days, from Oct 29 to Nov 5.

The token seems to be trading inside a descending parallel channel. The aforementioned low was made at the support line of this channel.

Furthermore, both portions of the decrease had the same height. Therefore, it is possible that SHIB has reached a local low and will bounce.

CEL has been decreasing since breaking down from a symmetrical triangle on Oct 27. The downward movement culminated with a low of $3.879 on Nov 4. This was only incrementally above the all-time low price of $3.83.

However, CEL bounced at the $3.95 horizontal support area and created a long upper wick (green icon). As long as the token holds above this area, the potential for a bullish reversal remains valid.

However, a breakdown below it would take the token to bearish price discovery, since there would be now support levels below it.

CRV has been increasing since breaking out from a descending resistance line on Oct 23. This was a sign that the correction that had been ongoing since April had come to an end.

The token increased considerably on Oct 25 and reached a high of $5.5 three days later. However, CRV has been moving downwards since, after creating a long upper wick with a magnitude of 13.30%. This is seen as a sign of selling pressure.

The closest support is at $3.63. This is the previous resistance area, which is now expected to provide support.

VRA has been moving upwards at an accelerated rate since Sept 29. This upward movement led to an all-time high price of $0.0874 on Nov 1. The high was made right at the 1.61 external Fib retracement level (black) when measuring the most recent drop. This level often acts as the local top after an all-time high is breached.

VRA has been moving downwards since. The closest support levels are at $0.0547 and $0.047. These are the 0.382 and 0.5 Fib retracement support levels (white) and horizontal support areas.

1INCH has been decreasing since reaching a high of $7.73 on Oct 27. The decrease created a very long upper wick with a magnitude of 35%. This is seen as a sign of selling pressure, since the higher prices could not be sustained. Furthermore, 1INCH barely failed to reach a new all-time high, falling short by only $0.14.

The closest support area is at $4. This is the previous horizontal resistance area, which is now expected to act as support.

CELR has been decreasing since Sept 26, when it reached an all-time high price of $0.198. On Oct 3, it broke down from a parabolic ascending support line, indicating that the upward movement had come to an end.

The token is trading inside a descending wedge, which is considered a bullish pattern. This means that a breakout from the pattern is more likely than a breakdown.

If one occurs, the closest resistance area would be at $0.15.

On Oct 18, DOGE broke out from a descending resistance line, and returned to validate it as support on Oct 27 (green icon).

The next day, it increased significantly by creating a large bullish candlestick.

However, it has been moving downwards since.

The closest support level is near $0.22, created by an ascending support line. 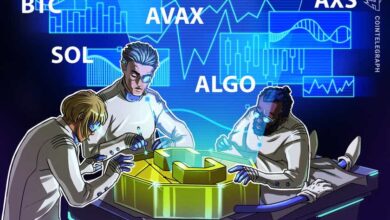