Lucky Block Price Prediction- July 18Lucky Block is facing an increase in buying pressure at the moment and it could continue to face the positive side if it breaks the $0.0009535 resistance level. Levels:

The sustained bullish pressure pushed the pair up to the $0.0009049 resistance level during yesterday’s session and sustained it.

The market price of the coin at $0.0009139 which later rises further to the $0.0009066 resistance level above the moving averages shortly after the 4-hourly chart opens today indicates that bulls are more active in the market at the present.

Thus, the price indicator which is also pointing up at around level 82% in the overbought region suggests that the coin is in an uptrend and the $0.0009535 upper resistance level may be the target in the coming days in its long time frame.

LBLOCK/USD Medium-term Trend: Bullish (1H Chart)LBLOCKUSD is losing bearish momentum as it rises above the $0.0009000 resistance level as the 1-hourly chart opens today.

The bulls caused a rise to the $0.0009139 resistance level above the moving averages as the journey up north continues. This, however, will give the buy traders the motive to influence the price tendency.

LuckyBlock is showing more upsides possibility as the price indicator signal an upward move, so we can certainly expect more actions from the buyers as they move the price of the coin up to a $0.0009535 high level soon in its lower time frame. 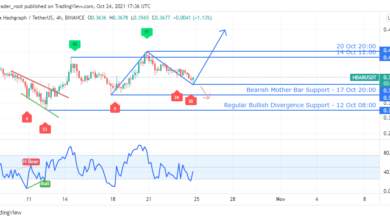