Bitcoin Price Cools down after a solid start to the week. After surging more than 16 percent in the previous two days, Bitcoin was barely changed on March 3. The world’s most popular and largest cryptocurrency was trading at $44,759, up with minor gains of 2%. In the last five days, the digital token has increased by around 17%. However, it is still more than 30 percent behind its all-time high of about USD69,000 set in November 2021.

At Present, With minor corrections, the BTC price is still consolidating and remains below the support level of $43K. The Currency is now facing resistance near the $44,250 level. However, a clear move above the $45K resistance might set the pace for bulls. On the Contrary, If there is a downside break below the trend line support, the price might decline towards $41,200.

Bitcoin’s Dead-Cat Bounce to Be Over Soon

Peter Schiff, a well-known Bitcoin critic, has turned to Twitter to predict that gold will increase shortly and that Bitcoin’s short-term rally will be ended, as well as to explain why.

This isn’t the first time SchiffGold’s founder has predicted “the demise of Bitcoin” and named possible or expected causes. The popular analyst informed his followers in a tweet that the crude oil price has risen to $106 and that he expects it to approach $140 next.

According to Schiff, gold will be the next asset to skyrocket. A new all-time high will be imminent if it goes above $1,950 from its current $1,924 price and reaches $2,000 pricing. The stock market’s dead cat bounce, along with Bitcoin will be over after that.

Also Read : Will These Strategies Help Yield 60% Returns Ahead Of An AltSeason During March-April 2022?

Schiff predicted a flash crash for the flagship digital currency as soon as it crossed the $30,000 threshold on its way down in late January on Twitter. When BTC dropped below $35,000, he tweeted it. Altcoins like AVAX, SOL, And MATIC Primed To Surge 35%! Are These A Welcoming Sign For The Bulls?

Bitcoin’s slides back at $38k, but funds keep moving out of exchanges 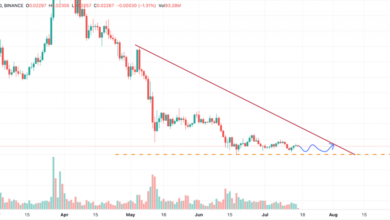