Bitcoin has been on a roll since the start of October and the past week in particular. It traded below $50,000 on October 5th but reclaimed that coveted line in the following days and kept climbing upwards.

It charted a multi-month high just shy of $58,000 hours ago, meaning a 17% increase in the span of a week. Usually, when BTC goes up, most alternative coins tend to follow suit at least against the dollar.

This doesn’t seem to be the case now as the majority have lost ground not only against the USD but against their leader too. There’s only one exception from the top-30 largest digital assets – the high-flyer Shiba Inu.

It’s safe to say that Shiba Inu and its native token have garnered the attention of the cryptocurrency community lately. Among some investors as well – this particular whale bought 6.2 trillion coins in late September.

As the futures trading volume was also surging, SHIB’s price went through the roof. It skyrocketed by 300% in roughly a week to its highest level since May at $0.000035. Despite retracing slightly since that peak, SHIB still stands at nearly $0.00003 and is up the only coin trading in the green against BTC from the top 30.

Data from CoinGecko shows that SHIB is more than 80% higher compared to bitcoin in the past week, and it has become the 12th-largest cryptocurrency by market cap.

This impressive increase comes ahead of the project’s upcoming NFT series. The so-called Shiboshis should arrive in the following days.

As mentioned above, the rest of the larger-cap altcoin space is deep in the red against their leader. Ethereum has lost over 10% of its value and currently stands at just over 0.06 BTC. Back in September, the trading pair ETH/BTC had reached a multi-month high of roughly 0.08.

Solana and Dogecoin have been among the worst performers in the past week. SOL, which skyrocketed to a new all-time high against the dollar in mid-September, has lost 22% of its value compared to bitcoin in the past week. DOGE’s drop is somewhat similar.

The graph below demonstrates the altcoins’ condition against BTC. As such, it’s no surprise that bitcoin’s dominance has soared lately from below 44% to 47%. 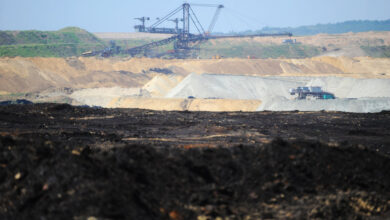 Bitcoin: This development could trigger ripples on a macro scale